Kaleidoscope Colour Therapy in the press

Anne Kaye (Lubbock)’s Kaleidoscope Colour Therapy has received a lot of attention in national and local press, including articles within educational journals, newspapers and appearing on local BBC TV news.

You can view a small selection of these articles below.

If you would like to find out more about Kaleidoscope Therapy or book a Training Course, please email Anne at info@kaleidoscopetherapy.co.uk

Click on the headline of each article to Iink through to the external page.

This article from August 2004 appeared in the Education News supplement of The Independent.

"My son and Britain's boy crisis"

This article from October 2016 refers to Kaleidoscope Colour Therapy.

"Show me your true colours"

"Show me your true colours"

This segment appeared on local BBC News back in 2004 and gives a brief insight into the Kaleidoscope Colour Therapy approach and a Kaleidoscope environment, in addition to comments from parents and pupils engaged in the programme

Press the play icon to view the recording* 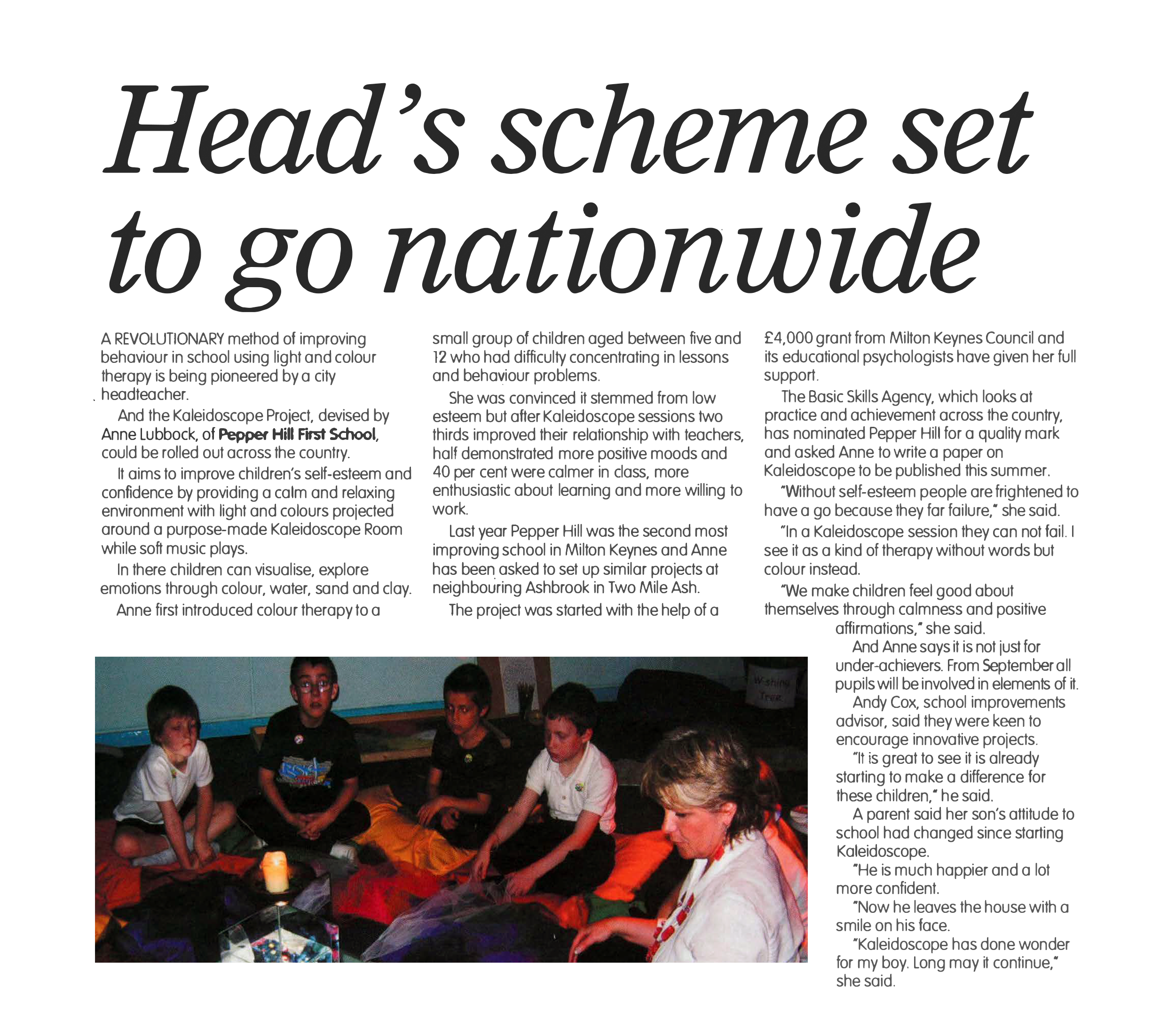 Headteacher of Pepper Hill First School Anne Lubbock has come up with a revolutionary way to improve behaviour and standards in schools and has caught the attention of the national press with the Kaleidoscope Project, as she’s named it, which uses colour and light therapy to relax pupils. It’s proved so effective that it may be rolled out to other schools across Britain.

Within a year non-authorised absence is down by 33% and SATS results have improved by a third. The Basic Skills Agency was so impressed by the achievements of the school that they’ve nominated it for a Quality Mark award and asked Anne to write a paper on the initiative to be published shortly.

Anne first introduced the colour therapy to a small group of children aged between 5 and 12 who were having difficulty concentrating in lessons and had behaviour problems. But after some Kaleidoscope therapy two thirds of the pupils improved their relationship with teachers, half demonstrated more positive moods and 40% were calmer in the classroo1n, more enthusiastic about learning and more willing to attempt work.

She points out that the Kaleidoscope therapy is not just for under achievers. In fact it has been so effective in her school that from September all pupils will be involved in certain elements of it. Last

September all pupils will be involved in certain elements of it. Last year Pepper Hill became the second most improving school in Milton Keynes and Mrs Lubbock has been asked to set up a similar project at a neighbouring school – Ashbrook in Two Mile Ash. She also has the backing of Milton Keynes Education Department. Andy Cox, School Improvements Advisor said: “We are always keen to encourage and support innovative projects like this which improve children’s confidence and self esteem. It is great to see that it is already starting to make a difference for these children.”

Mallory Henson, educational psychologist, commented: “When children are able to deal with their emotions and become better listeners, they are able to learn more effectively and this would be reflected in raised standards of attainment.”

One parent added: “Since starting Kaleidoscope Ryan’s attitude towards school has changed and he is much happier and a lot more confident. Previously he was tearful and didn’t want to go to school, but he now leaves the house with a smile on his face.”

Share This
To provide you with a good browsing experience, this site uses cookies. Find out more.